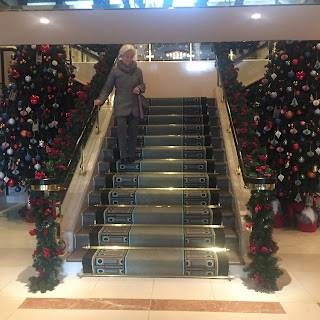 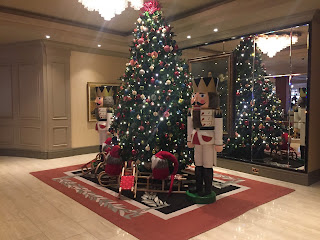 The Christmas decorations at the Westbury hotel.

Tonight the moon will be closest to us than it has been since 1948,
So find a break in the clouds and take a look..
Unless you are a weir wolf that is.

Strange things happen, 2 of my local coffee shops closed and I remembered that the guy who owned "The Loft" on Graften St also own a shop on Merrion row and another at the Point complex.
So I popped in.
What a welcome the girl gave me. She came around from behind the counter and gave me a nice big hug and a kiss. Mauritian people are wonderful.
I must go there for a while.

Work is picking up for Christmas and though the extra money is great I will look forward to January and February the "Herring days"when we rest up for a while.

At one of the gates coming out of Dublin port there was a grotto with the Virgin Mary.

Well our Muslim brothers it is alleged have told the Dublin Port people to take it away.
So it has been taken away.
The refugees have fled from countries which showed no tolerance  for minority people.
Now they are trying to press their intolerance on us.

This is a very dangerous game which is starting.

A group of Muslim vigilantes who were taunting English girls about their short skirts got an awful beating from local youths, In France riots have happened and Muslim women have had their veils torn off and burned.
Posted by John at 6:44 AM