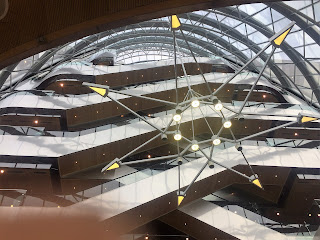 Inside the convention center looking up 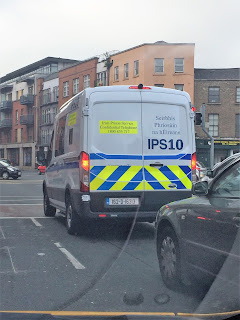 Bold people being transported to the courts. Irish Prison Service 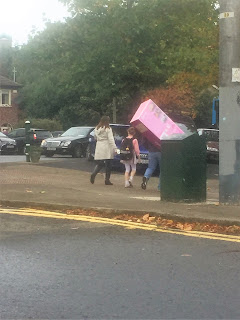 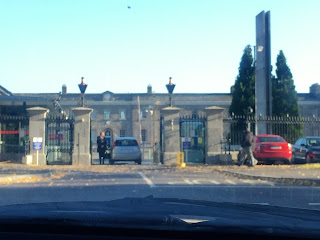 USA elections ! What an event that was.
It reminds me of the time we voted to reject the Mastricht treaty.
We voted NO and we had to vote again, until we got a YES.

Work wise I have been like a bumble bee going from job to job.
If you are a taxi driver you can work mornings, afternoon, evenings and nights.
Each shift is different especially nights with drunks and runners.

So it came to pass that I got a job to a place where you need to have a pass to pick up a passenger?

A guy rang over."Take me to Crumlin and back here again QUICK !"
Straight through the port tunnel over through South Circular Rd up to Drimnagh to pick up his passport.
Then back again.
Something like €70 plus tolls.
One thing for sure is that he will never forget his passport again.

Once I had  a girl (repeat story) from Venezuela going to the airport from Adelaide Rd  it was on Sunday.. When we arrived at the airport she said "My sister has my wallet and my credit cards, go back to her and get them for me"
She didn't even have her fone but I said that the best thing to do was to ring her sister and ask her to come out with the wallet and I would collect the taxi fare from her tomorrow,
If I had done the return trip it would add €60 to the taxi fare and she would probably miss her flight.
Happy days!
Good job well done.

"I brought your sister to the airport and I could have brought her back to you to collect her wallet.
By coming back I would have made an extra €60!
But by chance she would probably have missed her flight.
So today you are playing smart with me by not answering your fone and shafting me for my taxi fare.

I hope there is a God"

Then I turned off my mobile.

The next morning I had a text THE REPLY SAID

"My battery was flat, come, and I will pay you"

I went to a play last night by the Sheridan brothers Jim and Peter
Meet the Quare fellow
About the life and death of Brendan Behan it's great stuff, but not comedy.
Click here
Posted by John at 11:47 AM