Another day Another dollar. 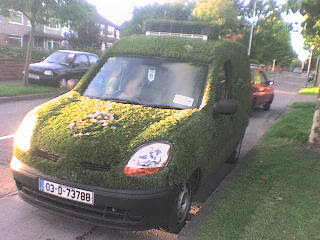 Guess its time to mow the car 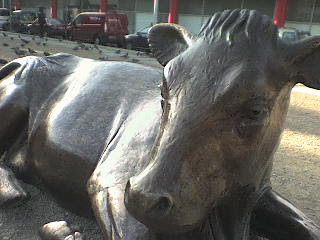 A metal cow in the park in Jervis St

I have had such a good week that I need never work again in my whole life.
I have enough money to last me for the rest of my life.
Can you imagine that?


That is unless I need to buy something!

It has been a good week and all thanks to you my traveling public.

The 2 Polish girls going to meet their mother coming in from America,one so happy
"My boyfriend is from India and he has the most beautiful eyes,like a calf, so full of kindness and goodness, on the day I met him I knew we would be married.
My mother has never met him.
He is at home cooking the dinner and he is so nervous you cannot believe!"
Her sister was younger and had no English.
It was wonderful to meet someone so full of the joys of life.

She will go far.

You would often like to complete the journey and be a fly on the wall to see how the evening went.

Tonight the volunteers from the Niall Mellon trip came home and I brought 2 of them home from the airport.
Its a great thing to have done lads.
You have changed the lives of hundreds of people and the trip will have changed your lives for the better.

You dear reader can plan to go now click on the link,it will not be too hot when you go,one of my volunteers was a nurse the other worked in a bank.
So give it a whack collect a few bob and house a family!.

My son built a house in Brazil a few years ago, all in all its just about a months wages, including his fair but when you think of the change in those peoples lives you have a warm glow inside.

Loads of crashes on the road tonight a light mist and the boy racers come skidding to a thumping stop.
Great moment on Dorset street with cops holding down a "Suspect" on the road 10 cars with flashing lights at least.....Then later on they seemed to be taking off the cuffs and saying "sorry it was someone else"

Drunks are such a pain in the ass.
Went to the Taxi rank and a guy asked me for Malahide. "About e15" Listen mate if you only have e15 your getting off in Clare Hall.
He gets in and falls asleep with the "chainsaw" of dreams(Snoring like mad) purring away in the back I head off to Malahide.
As we were got into the village I pulled over to ask a guy where was the estate where the guy lived. The guy looked confused and said say it again. He mispronunced it twice.
"Sorry I didn't know you were foreign"
"I am not foreign. I am deaf"
I turned on the light and in seconds he told me I had just passed the turn by 20 yards.
Its great when you click that the problem was he could not read my lips,but with the light on the job was A OK.
The asshole in the back after shaking him told me where he lived.
He took a long time to take out his money, so I got out to "Help" him.
"You are a really fucking nervous guy."
Look I don't want you to fall.
He paid in full over e30.
I held him, then he fell forwards line Karl Lewis doing a 100 meter dash,but did not fall.
I'm OK!
And so he was,
And so was I.

Later I went to the airport an picked up a guy and as it happened he worked for for one of my heroes Chuck Feeney I met him a few years ago and I nominated him as best passenger ever!

He offered me a job but I could not take him up on his offer.
I did not know who he was at the time, but he has become one of role models in life.

Perhaps some other day we will meet again.
He is a real down to earth guy, no bullshit and funny too.

Ok Ok so I didn't write about you!

One problem about taxi driving is that a guy takes a taxi once in 6 months and he thinks taxi driver must remember him forever, I have to do 30 fares a night.


People in America have easy access to guns. This video was produced to let people see what damage a bullet can do. U tube have taken it down. But it goes directly to the point.
I gasped when I saw it.