Thanks a lot Bill. 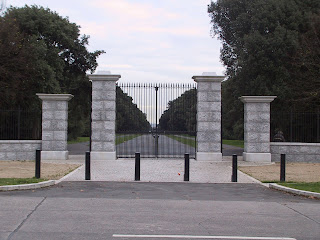 The new entrance to St.Annes park clontarf once the home of the Guinness family. 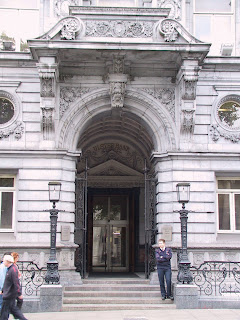 Ulster bank in College Green known as "church"in security circles as many of the churches lodged their cash there.If you click on the photo to enlarge it you can see the Red Hand of Ulster over the arch.


It was on Friday that the traffic came to a stop.
I had a family from Crumlin on board.
Young couple with a cheeky baby,and the mothers brother, the baby was giving loads of "guff" she was giving out yards the baby was perhaps little more than a year old.
I do believe that some people have been here before.
This one was a real comedian. Every second word began with fkn, a born again Maureen Potter a laugh a minute.
Then I noticed that the traffic had stopped.

After 5 minutes I noticed that no traffic was coming the other way either.

I am a patient man, I will wait for a blind man or an old person to cross the road, but to sit and wait is not my thing.
"Look there's nothing moving, I don't know whats going on ,but theres no traffic coming the other way either. I want to turn around and cut down to the Quays past Blooms hotel, is that OK?"
When we got down there and cut back up on to Thomas St there was not a car to be seen.
"I don't know whats going on, must have been a crash"
Young family enjoying a days shopping in town.
Traffic in knots.

I went home after that.

What was the problem?

Bill Clinton was the problem.

They shut off all the streets without notice.

I like Bill but.
Don't treat the people like this.
He was going to host a fund raiser dinner for Hillary.
Even a dinner at only e1600 a plate can be a public relations disaster when you spoil the travel plans of thousands of people.

Travel low key Bill, you know my number,you are safe with me.

It is not his fault alone.

The EU parliament was in Dublin a few years ago and all the roads were closed while our "leaders" were brought in under escort to the city center.

Who do these people think they are?
Or more to the point why do our leaders not respect the people?

Still we elected them so we get what we deserve.

Loads of things happened, but I got the days of the week mixed up and thought Friday was Thursday. I had lost a day,but Friday was not a great night from what I heard.

The moneyed Irish ie. wives of taxi other drivers are in New York to do their Christmas shopping. While the husbands flock to the RDS to buy ART(I use the word loosely)

In times of financial doubt people choose Gold,Silver,Diamonds,Art.....And the last Ace in the pack.............Drugs.
There was a story about some high figure in the court system (hope this is vague enough)being caught with e300,000 worth of drugs. Well she had a problem and she needed loads of drugs to keep up her habit.

Mary who works (prostitute) off Baggott St. was frozen on Saturday night, she really was cold, she always says hello when she comes into the Spar."Im bleeden freezin I am,feel me hands" I felt her hand and the last time I touched a hand so cold it had been dead a day.

She is a bright girl,doing what she can to live her life with her habit, or her boyfrends habit,you don't ask.
Later on in the night I pulled over to a police car (Mary to them is a criminal so they pull them over and cause them grief)" theres a guy unconscious on the corner of Fitzwilliam and Leeson St., on the corner."corner of Fitzwilliam Sq?".
No, turn right,then left and he is on the footpath at the corner". "Whats your number anyhow" No reply,then he put his hand over his number.
Says a lot when they hassle a junkie prostitute while a guy is dying for all we know around the corner on the footpath and they show little interest,he had been there for around 3/4 of an hour at that time.
I don't get involved but there should be a number to ring when you find a person out cold.Soon it will be cold enough for them to die of exposure.
I feel that its their choice to get so drunk,so why should I care.
But there should be a number to report a "man down".

Saturday night worked out for me,interesting people, nothing dangerous,no sick people.
Wow you are so lucky working at your job, where people don't attack you,or get sick down the back of your shirt.
Not to mention the other dangers like robbery or blackmail!

Wow all human life is there for the taxi driver.

Blackrock, Foxrock, Cabinteeley seemed to be my lot that night. The fare I had on Friday to Crumlin gave me a bigger tip than 5 of those posh people combined gave.
Them living in mansions worth millions.
Suppose thats how they have it.

I decided to head for town and passing through Blackrock with my roof light on one of the "boy racers"passed me out and stopped for 2 girls who had hailed me. They walked right past him and got into my car.
Not before a quick exchange.
"I saw you first!"
"Not driving like that. Muppett"
Nice one.Couldn't have said it better myself.

Where's the bottle opener?
Look its a great day when you get a new car,but be careful that you hold on to the keys.
Posted by John at 3:12 PM