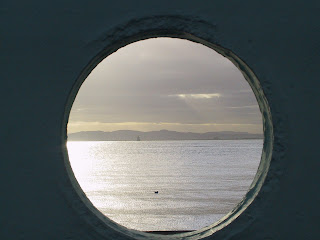 Looking south towards Dalkey through a porthole window in Clontarf. 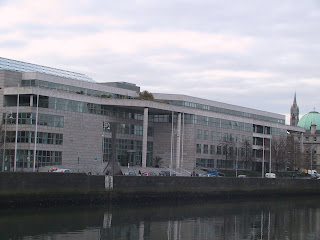 This is the Dublin corperation offices built on the site of a Viking "find".

My car Christmas tree is up!
6th year and still working.

A Dublin man was charged at a special sitting of the Special Criminal Court today with having a Kalashnikov assault rifle and ammunition in the city on Thursday and with membership of the INLA.

Denis Dwyer (aged 22) a plumber, of Drumcarra Avenue, Jobstown, Tallaght was charged with the unlawful possession of a Kalashnikov-style assault rifle and 21 rounds of .223 inch ammunition at Camden St on Thursday.

He was also charged with membership of an unlawful organisation styling itself the Irish National Liberation Army, otherwise the INLA, on the same date.

Garda Terence Gleeson, Harcourt Terrace, gave evidence of arresting Dwyer at 1.50pm today on suspicion of possession of a firearm and INLA membership.

Garda Gleeson said that it was his belief at the time that Dwyer had committed scheduled offences.

The court remanded Dwyer in custody until Wednesday, when a bail application is expected to be heard.

"Well I have heard it all now"
And the next time I will be even more surprised.

Well I have been over and back all night and now on Sunday morning I am winding down,
Good night Joe public is out partying and I have 4 visitors over here at present,I hope I will meet them all.
Last time it was all Southside this week it was 50/50 But I hit on the same housing estate in Blanchartstown 3 times.
There was a bit of police action there tonight,I counted 5 police cars in the one cul de sac(What's that is in French?)
"Shere there all mad dere."
One of the guys I brought there was really crazy drunk, I had to stop the car and talk to him, he knew that he would get a smack if he carried on the way he was going.
This cowed him a little,but the need for a shop gave me a break to the situation.
While they were out of the car one of the guys said that "He's OK really, he just got a bang on the head when he was younger and he goes a bit funny "
When we arrived at his street he took off like a jackrabbit roaring!

"Jaysus mister I Don't know how you can do this job man!"

The rush from 2am to 4am is crazy.

Boys and girls don't stand at the ranks in the city center.

Taxi drivers in the know would NEVER go to the rank.

BECAUSE you must pick up the homicidal slobbering idiot who is standing there.
If you are a bright driver you learn you lesson the second time.
If you are really stupid you will get smacked around the head until you understand that you only pick up the WALKING dead!

SO Walk towards your home facing the incoming traffic.
let your girlfriend walk ahead alone as bait for the randy taximan!
If 4 people are going the same way split up it increases your chances,then you can regroup for the trip.
Don't smoke or have a big bag of Kebabs in your hand.
Another tip is
Try going home early to your local area pub to finish off the night.
Don't stand with your arms around, or lean against a pole, unless you are dancing!
Go to Joys in Baggott St,it closes around 5.20 and there should be a few cabs around when you come out.
Don't ever go to a casino when you are under the influence, its a REAL waste of money.


Well I told you I would go racing in a racing car.

Sorry boys and girls not working this Friday, you can waddle home like lost ducks without me (No thats too cruel). Minus 2 tonight winter is here, but in Ireland we do not get extremes of weather, we have the gulf stream bringing warmer water to our coast to protect us.
Remember Mary the hooker? I bought a coat in a thrift shop for e10, it fitted her.
At least she can't inject that.

I have added a new name to my "blogroll" Mike seems like a good guy!

Yesterday was one of the days where if you were alive you would remember what happened in Dallas Texas,This year a young catcher baseball star named Joe Kennedy dropped dead,Today Lee Harvey Oswald the suspect for shooting JF Kennedy was shot.

Whatever else happens I must say that we should dance more
It's the trailer Sally Potter shot to launch her beautiful movie "The Tango Lesson" (1997). The notes of one of Astor Piazzolla's masterpieces, Libertango, The chello is played by Yo-yo Ma, who also appears in the clip.
I love the music of Astor Piazzolla I bought around 6 cd's of his on cdwow.
I like other music too, but he is really good.
Just one more tango from my favorate tango dancer.But we should not forget the taxi tango driver.
Yes he is a real taxi driver who directs these shows,and runs a dancing school...His details are in a blog.
I didn't know how popular dancing with puppets was, but it is. was until now.
You tube is great fun.
Posted by John at 4:20 PM