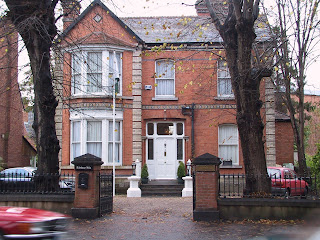 Pakistani embassy a hard one to find if you don't know Ailsbury Rd Crosses over the Merrion Rd. 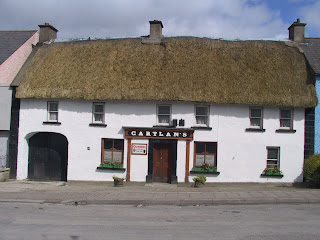 Well to all you song writers I hope you said a special prayer to St.Cecelia her feast day is around now.

Happy thanksgiving to all my American readers.
Americans can't believe that this is just a normal weekend for us,while we wonder what all the whoo haa is about.

I was in the shops today,shopping is a thing I hate,its the looking.
I buy loads on line,my poor postman.
(I have just remembered when the postman was constant and like the bin men and the milk man,they all got a Christmas presents.)

Well the Dubliner 100 best restaurants 2008 is out now. A must for every taxi driver.
One of my best loved restaurants is La Cave in Sth. Anne St beside Vards the furriers.Its hard enough to get a table so I am glad its not in the guide,I want it for myself. I bet you that you would be hard put by to know where half of the places are.
So buy it for yourself and study up after Christmas.
I Just hand the book back when I am asked where to eat.

Magnum have a big coffee table book out e140! well worth a look.
Fantastic photographs.But you must remember that these guys take 1,000 rolls of film a month,still its a great great book.

The other one I bought was "Old Moores Almanack"This is an old crazey thing where he predicts the future,the advertisers sell lucky charms and claim to remove curses.
Full of Magic and if you believe any of it you would hide under your bed for the coming year.My dad used to get it at that time it and fairs and was more like a mini encylopedia

One lady today got in frantic. I am supposed to be in the Dail (parlament) at 9 it was then 10 past. I was just about to share a great joke I herd when her phone rang.
Just as well as she might have been alligned to the butt of the joke, which goes.

Pavarotti's will was read out today.

Suprisingly an Irish lady was mentioned in the will.

Yes Mary Harney was left all his clothes.

She is a lot bigger in real life.

A guy from Morocco who steered me his favorate route to Blanchardstown.
I had you before my friend and I am once again impressed by your shortcuts.
I was in Morocco 40 years ago.He said its changed so much.
He is right I should go back.

The other guy who had a strange job. He bought advertising space in Magazines and then sold it on to his clients.

Or the guy who bought and sold FUTURES. " don't buy shares in Banks or Property."
There was a guy called Terry Ramsden who made millions doing that and gave it back to the bookies, he was horse trainer,think he is still going.
Or the German guy who looks after the printing machenes in the mint.
Been around the world, would love to hear him talk about all the countries he has been in.
He knew well about the time that Germany tried to kill the British economy by forging millions of banknotes. Iraq printed very very good $100 bills as well.

Wow I hardly have need to watch TV.

When this guy got shunted he did not even get her number,try telling that to the insurance company.

YES I did buy the wrong sat nav.

Good night take care.
Posted by John at 9:37 AM