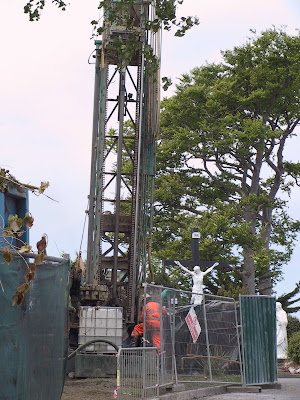 Looking for water in Raheny, with water rates coming most big users are going for their own supply.. What whit the crusafix and all its bound to be holy water. 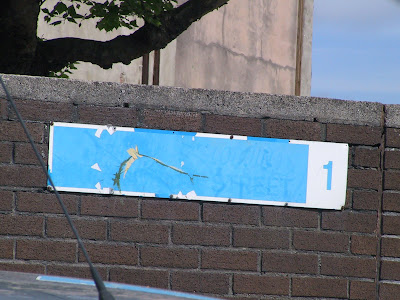 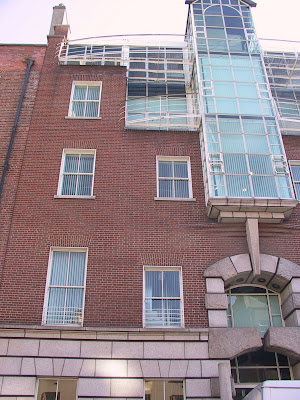 This is a building of modern design stuck into a Georgian terrace.

Well I joined the line for Connelly station the other day. I had seen the Belfast train pass over the Clontarf road while I was coming into town.
The waiting line goes around the corner and away back, but I was feeling lucky.
For once I hit lucky and got a run to Dundrum shopping center. Two ladies into retail, not shoppers but shopkeepers.
Well one talked and man she needed a handbrake on her mouth. I was wondering why she was putting Vaseline on her lips as we drove away at the beginning of the journey.
She worked for a UK store and she had climbed the ladder in management.
They gave her a Jaguar XYZ 4.2 open top car and she was hitting the limit with regard to speeding. "If it wasn't for the 2 licence system I would have been gone long ago."
"What do you mean 2 licences" said the other girl.
"I have a UK licence and an Irish one, If I get stopped in the UK I present my Irish licence, I pay the fine and they can't put the points on my licence because I live out of their jurisdiction, In the Republic I present the UK licence"
"How did you get all the points you have on your licence then?" said the other girl.
I loved her answer.
"Sometimes I forget where I am"
I hope I don't meet her when she is driving.

A few years ago Nolans transport in Wexford had a big strike and then they only employed foreign drivers, there were a lot of accidents but no one lost their licence.. I think it is time for a European licence, then this could not happen.

I had a double for Peter Ustinov in the car today going to the airport, we spoke about how you sometimes meet the most extraordinary people when you least expect to meet them. His example was when they were visiting an island in the West Indies, they wanted to visit a special sulphur pool which was supposed to be good for your health. They had to go through a mangrove swamp to get there and on the way the boatman slowed the boat down for a few seconds. would you like to see a special place which is close by? It will only take a minute." The agreed and he pulled the boat into a small cove, He told them that when he was a young man he used to bring a man of the cloth here to pray and think. "this is the place where he wrote the speech, I have a dream, Dr Martin Luther King"
They were very impressed because he did not tell many people that story.
English man living in Florida International lawyer. Nice meeting you sir.
I would often let smart people stew in their own ignorance, People who don't want to learn deserve not to know.
Picked a guy off the Ferry the other day, just back from a concert in Manchester "Black Eyed Peas" over and back for a concert and straight into work..."Thats rock and Roll"
Near the 4 Seasons I picked up a fare going to Baggott St. She runs a French restaurant, one thing among others the French do really well is cook so I took her card. Chez Max in Baggott St.
Food is a personal choice, I would never send someone to a restaurant so I always carry a restaurant guide in the car, if they say these places are very expensive I drop them at a McDonalds (THAT GUY IS DOING REALLY WELL SINCE HE SOLD THE FARM)

Do you know the Dalyn hotel?
They do a tasting menu, thats a sample of every dish that they have on the menu.
This is one thing I would like to try.
Once when a big show was going on I had a fare to the Dalyn, they were the wives of pop stars.They were impressed about what the hotel had to offer.
Still you are all stars in my taxi

J.P>Morgan do you know it?
Well I didn't so he gave me a sheet of paper which directed me to Military Rd Dublin 8 I guess the directions were for the Hilton in Kilmanham..
No it not down there.
IFSC We will go there first I said, so on the way he rang, its behind the IFSC house he said. I knew he meant to say behind Jurys hotel, so I stopped at IFSC house and turfed them out. I had gone 10 yards when I saw it on the other side of the dock, so I turned into where the arch is and walked down to direct them..Sounds more like a whiskey than a bank J P Morgan
Strange to see how banking has gone, I am glad I held on to a few coins of the old money now.

So I have not been well, but I aint been too ill either thank God, but off form all the same.
Posted by John at 12:46 AM