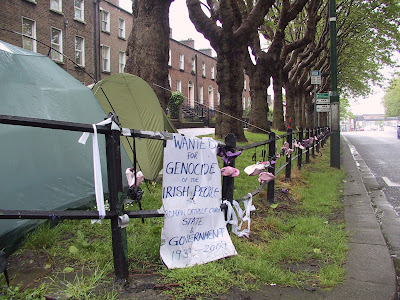 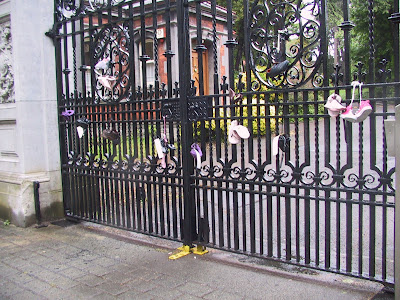 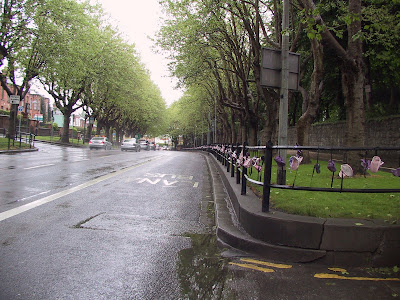 Well one guy is taking his protest to the gates of the Arch Bishops Palace, baby shoes tied on the railings.."A wolf in sheeps clothing" the poster says.
The Bishop himself has Victorian mansion up near Bono's house.
People are sick to death with the churches response.. There should be a LYNCHING party sent over. Good luck with the protest.
Worked yesterday until I couldn't feel my legs because they were numb.
So I stopped and got up this morning, a wet and misty day in Dublin

Sometimes you make a mistake and you say I will NEVER EVER make that mistake again,,but you do.
I picked up a couple with a small kid going to Murrays car hire in Ballsbridge.
Loaded up and off we went. When we got there I stopped the meter e12. "I want you to wait for us and drive in front to get us on to the correct road"
So everything was unloaded. Then his wife paid me while he was in the office.
That was the mistake ! I waited loaded up his car and set off. I drove them down to Heuston and stopped to get the extra e16 which was on the meter.
"This is your road straight on" Then before I drew a breath they drove off.."Thank you John, you are so good!"
I have a broad back so I am well able to take these things and it was my fault, I should have said that she should pay at the end..
Well God looked after me,Just as I was in a fowl mood a girl stopped me, A Russian girl with platinum blond hair and (after she took off the sahdes) cobalt blue eyes.
She had great English and she is a student here in Dublin. Trinity college economics!
Years ago Aer Rianta took over the duty free in Moscow, the fitting out was done by an all Irish crew and when they came back all the lads had fallen in love whit the beautiful women...Sadly those exotoc flowers soon wilted in the Ireland of that time, there was no Skype or internet and they became desperately loneley, after a while many of the marriages broke up and they went home. Now it works as there are so many people from so many countries here that no group is too isolated.
I still think its great, we will great looking kids in a few generations.. The old gene pool need some fresh imput. 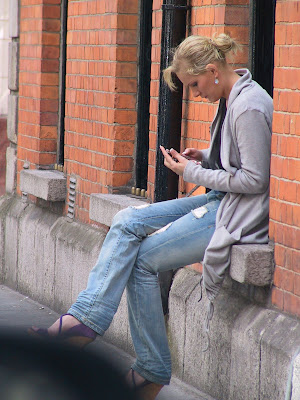 A young girl sits writing a text before going to work..
Posted by John at 2:20 AM